I am sure that the mere idea of such a target seems impossible to many.  However, for a variety of reasons, many indicated in the aforementioned article, I believe that such a target is not only possible but increasing in likelihood.

I would like to provide an update on the ideas originally presented in that article, given that much has happened since that article was written.  In this update I will divide my comments into two areas, technical and fundamental analysis, as I did in that original article.  In order to avoid repetition, I will assume that one has already read the aforementioned original article.

Here is a chart of the S&P500 and Dow Jones Industrials on a monthly basis since 1980: (chart courtesy of StockCharts.com) 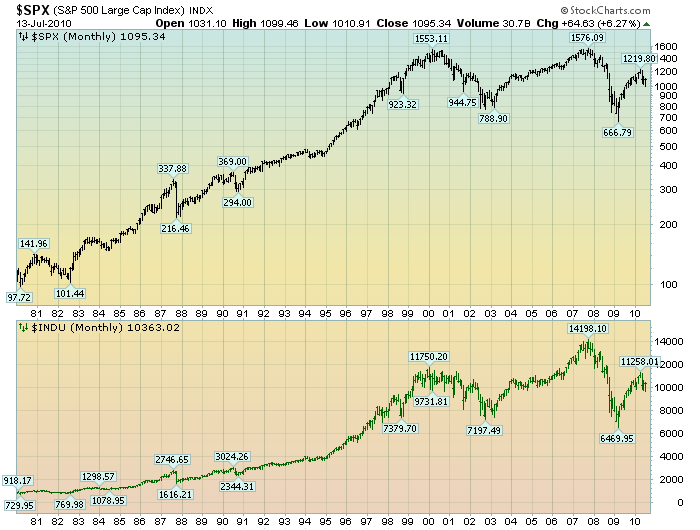 From a technical analysis perspective, it remains difficult to derive any meaningful “support” between current S&P500 levels and that of the 100 price region.

Additionally, there are a variety of other technical measures that are worrisome, both from a long-term and short-term perspective.

One other item that should be considered is that of time.  As I wrote in the March 2009 article, “Should the stock market fall to the 100 area, what might be the timing?  Again, this is a difficult question.  If one were to casually answer, one might think such a decline from the October 2007 highs might occur in a 3-5 year timeframe, perhaps longer.”  Of course, we are rapidly approaching the 3rd anniversary of the October 2007 high, which is significant.

The fundamental argument for an S&P500 target of 100 is complex.  Many would vigorously argue against such given the current economic environment of strong corporate earnings, robust financial markets, optimistic consensus economic forecasts, and various statistics showing sustained growth.

Perhaps the easiest way to envision a S&P500 level of 100 is in a “negative earnings” environment.  When the original article was written, this “negative earnings” (i.e. a loss) for the S&P500 seemed like a possibility.  Now, with consensus 2010 earnings (on an “operating basis”) estimates of $80-$85/share, with increases projected for 2011, such a “loss” scenario would seem highly improbable.

As I wrote in the June 29 post, “it behooves us to at least condider whether instead we are in a continuing Depression, as I have previously written.”  If one does believe this is a Depression – in which current economic strength is of a transitory manner – the ramifications of such are important, as it would indicate that not only is more weakness coming, but most likely of a more (vs. the trough of 2009) severe nature.

My analysis indicates that our current and future economic conditions are of great complexity.  At the core of any current economic analysis and forecast should be the question “Are our current national actions to improve our economic condition leading to that of sustainable prosperity?”  From an “all things considered basis” I do not believe so, unfortunately.

As to whether a S&P500 level of 100 is forthcoming – I continue to believe in the following, which I stated in a September 1, 2009 post:  “Since I wrote the article “A S&P500 Target of 100?” discussed in the last post of that Depression series I have used the S&P500 price of 100 as a type of potential endpost, and have been thinking of what type of probabilities to assign to its likelihood of occurring in the near future (a  two-year window since it was written).  Most people would think that such a price target is simply impossible.  However, since I wrote the article in early March, the probabilities I have assigned to it have increased, unfortunately.”