Here are two charts from the Minneapolis Fed site:

They show, from a historical context, how declines in employment and output during this period of economic weakness (which FRB Minneapolis refers to as a recession) compare to those of previous recessions.

First, the employment chart.  Here are two notes regarding this chart:

1. Employment is nonfarm payroll employment calculated by the Bureau of Labor Statistics.
2. Postwar recessions include the 10 recessions as defined by the NBER that started between 1946 and 2006. 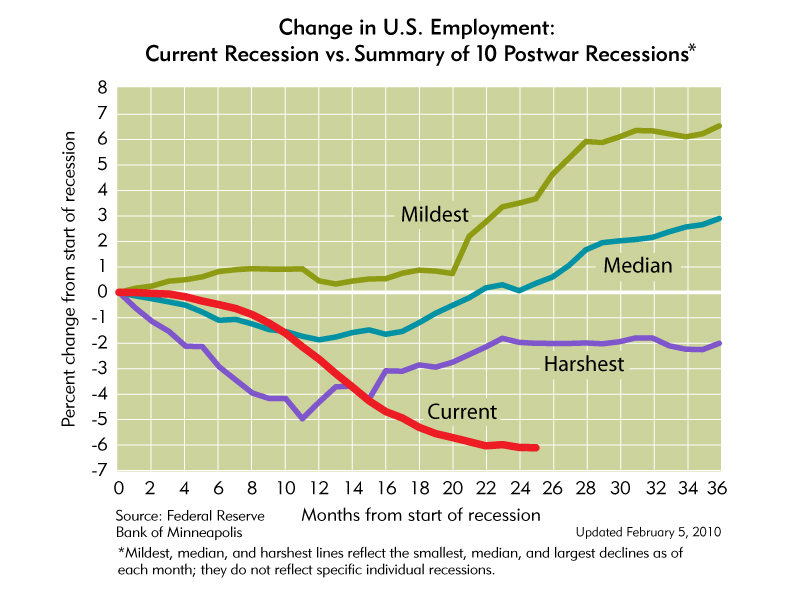 Second, the output chart.  A couple of notes regarding this chart:

1. Output is gross domestic product adjusted for inflation as calculated by the Bureau of Economic Analysis.
2. Postwar recessions include the 10 recessions as defined by the NBER that started between 1946 and 2006. 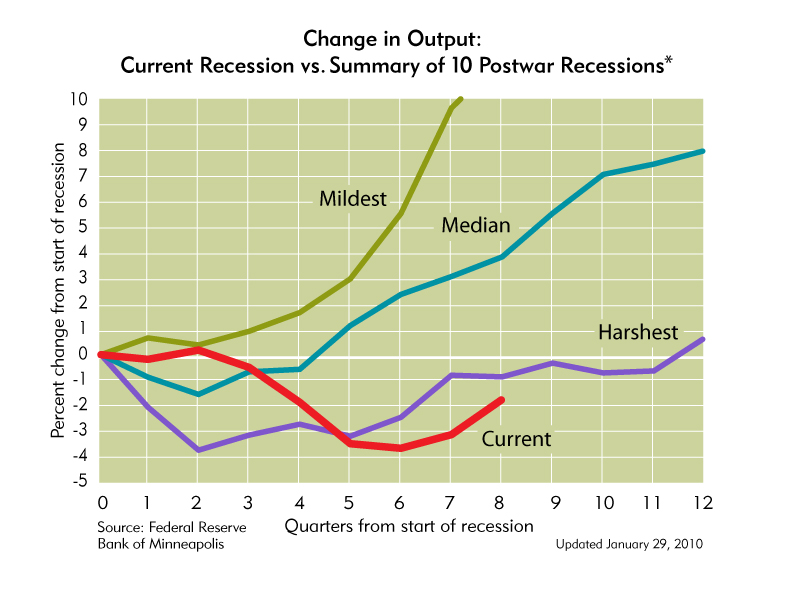 There are other pertinent notes on the FRB Minneapolis page, as seen below:

Background on Recession/Recovery in Perspective

This page places the current economic downturn and recovery into historical (post-WWII) perspective. It compares output and employment changes from the 2007-2009 recession and subsequent recovery with the same data for the 10 previous recessions and recoveries that have occurred since 1946.

This page provides a current assessment of ‘how bad’ the 2007-2009 recession was relative to past recessions, and of how quickly the economy is recovering relative to past recoveries. It will continue to be updated as new data are released. This page does not provide forecasts, and the information should not be interpreted as such.

The charts provide information about the length and depth of recessions, and the robustness of recoveries.

The Business Cycle Dating Committee of the National Bureau of Economic Research determines the beginning and ending dates of U.S. recessions. http://www.nber.org/cycles.html
It has determined that the U.S. economy experienced 10 recessions from 1946 through 2006. The committee determined that the 2007-2009 recession began in December 2007. The ending date has not yet been determined. Ending dates are typically announced several months after the recession officially ends.
http://www.nber.org/cycles/dec2008.html

The 10 previous postwar recessions ranged in length from 6 months to 16 months, averaging about 10 1/2 months. The 2007-09 recession was almost certainly the longest recession in the postwar period. But the total length of the recession will only be known when the Business Cycle Dating Committee retrospectively determines the final month of the recession.

The severity of a recession is determined in part by its length; perhaps even more important is the magnitude of the decline in economic activity. That is, how much do employment and output fall?