Today, I would like to make a few overall comments about the US Dollar.  Here is a weekly chart of the US Dollar from 2000, with the MACD and CCI indicators shown above the price plot: 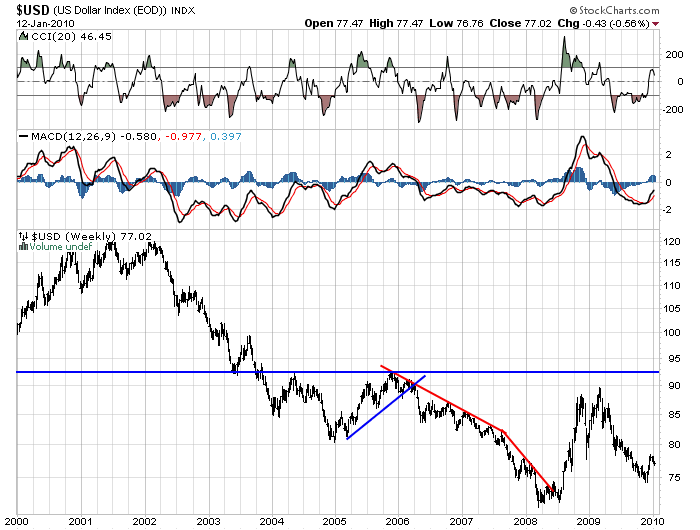 I have also included a few trendlines shown in blue and red.  As one can see, at the present price of 77.02, the USD is near the bottom of the price range of the last 10 years.

Many people, especially those of the “hard money” and “Austrian” philosophies, have long held that many of the actions we (as a nation) have been taking to combat our current period of economic weakness would unduly pressure the dollar.  These actions have included very low interest rates, truly outsized interventions (including “money printing”) and deficit spending.

So far, as can be seen on the chart, the US Dollar has “held in there”, most likely for a variety of reasons.

It should be very interesting to watch the US Dollar from here.  Although there appears to be few, if any, signs that a severe US Dollar decline is impending, as stated above many of the actions we have been taking (and will most likely continue to take) are certainly cause for concern when viewed in context of US Dollar strength.

The strength of the US Dollar is of paramount importance, because (of course) perhaps the fastest and most assured way of getting into severe economic trouble is to have rapid currency depreciation.