I would like to highlight two notable developments that have lately arisen.

Both have to do with interest rates on short-term US Government securities – the 3-month bill and 2-year note.

First, a chart of each of these securities’ yields.  Shown is a daily chart from January 2008 to the present, in LOG scale to show detail:

As one can see, yields on each have fallen dramatically lately and now are near or at levels last seen during the height of the Financial Crisis during Q4 2008.  During that time, investors aggressively moved into these securities as they were perceived to be a “safe haven.”

The most common reason given for the recent yield movements on these securities is that there is high demand driven by needs for year-end portfolio adjustments and similar motives – i.e. the movements are “benign” in nature.

I do not necessarily concur with these “common” rationales, especially in a market environment where there have been myriad danger signals exhibited, of which I have previously written.  While I am not certain this drop in yields is due entirely to a “flight to safety” (i.e. as purported “safe haven” securities) as in 4Q 2008, I suspect it is a least a major driver.

If indeed some or most of this yield movement is being caused by investors’ fears, it would be most odd in that these securities are reflecting heightened fears while a broad array of securities don’t appear to be reflecting such fears as measured by their price movements.

To illustrate, here is a simple comparison between the three month Treasury Yield and VIX (seen below in red) since 2008.  I will use VIX as a general “fear” proxy. Note the inverse correlation during 4Q 2008 and the lack thereof now: 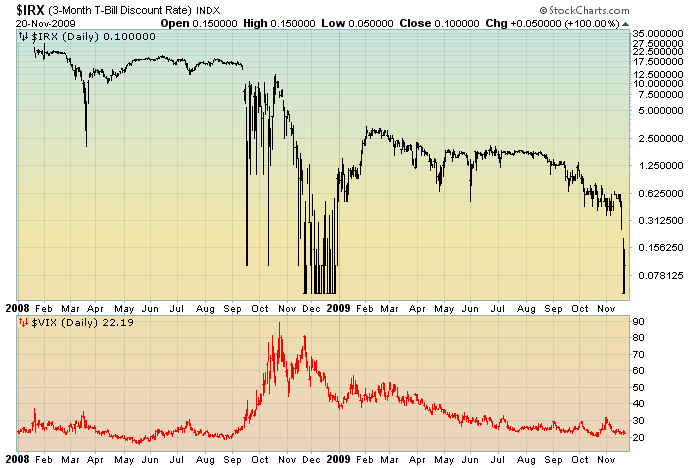 Another aspect of this dropoff in yields bears comment.  Why would a rather large class of investors settle for minuscule yields, at a time when major asset classes have done very well over the last few months?