This is the last blog post (Part V of V) in this “Danger In The Markets?” blog series.

I would like to end this blog series with another look at the daily 1-year S&P500 chart.  This chart depicts a Rising Wedge from the March lows.  As well, I have indicated a potential H&S (Head and Shoulders) pattern in red.   For those unaware, both of these patterns are bearish.  I believe more in the Rising Wedge than the H&S, as it is more established.  Additionally, the VIX can be found along the bottom of the chart: 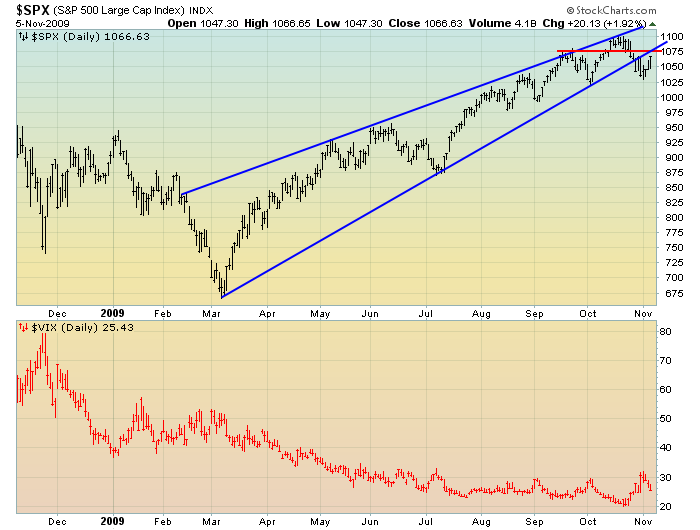 One will note that in yesterday’s post (Part IV) there was a daily S&P500 chart that showed a Rising Wedge pattern as well.  The difference in appearance between that chart and the one above is that the bottom trendline is drawn differently – the chart above incorporates the early October low.  Regardless, should this Rising Wedge pattern be validated through future price action, conventional Technical Analysis methods would “measure” a resulting price far below the March low of 666.

As I have mentioned repeatedly on the blog (and these commentaries can be found under the “Stock Market” and “Investor” categories) I strongly believe the rally from the March low of 666 is a Bear Market Rally.  The implications of this belief, should it prove accurate, are profound both from a financial markets perspective as well as an economic one.

As I have stated previously, I do hope that my analysis and conclusions as to where the markets and economy are heading are incorrect, and that we are on the path to true Sustainable Prosperity.  However, I am firmly convinced from both an economic and markets perspective that we face an array of difficult problems in our economic future and resolving them will likely prove most vexing.

It should be noted that, as mentioned repeatedly on this blog, my views are very contrarian in nature.  As such, they are quite at odds with those held by the vast majority of economic and financial professionals who are firmly convinced that we are currently experiencing a recovery with little or no risk of further economic damage…

4 thoughts on “Danger In The Markets? Part V”