I would like to make a couple of disclaimers before beginning.  First,  an extensive overview of all of my Technical Analysis observations would be very lengthy, and it would also infringe upon some facets I consider to be proprietary.  As such, I will limit my observations, but I think most people will still get a clear overview of my thoughts.  Second, I am aware that many people don’t believe in Technical Analysis – which is fine with me.  Even though I use Technical Analysis extensively, I will readily admit it is not infallible.

I would like to begin by posting some 9-11-09 commentary from www.sentimenTrader.com that I found interesting.  In and among itself, I don’t find this 5-day Up Issues Ratio to be conclusive, but I do find it notable when viewed in conjunction with the other charts I will post.  Below is the commentary:

Most notable is the 5-day average of the Up Issues Ratio, which moved to an astounding figure of 76%.  This means that over the past week, on average 3 out of every 4 issues on the NYSE closed in positive territory.  That’s the 2nd-highest reading in 22 years (the highest during that time was on January 6th of this year, the red dot on the chart below): 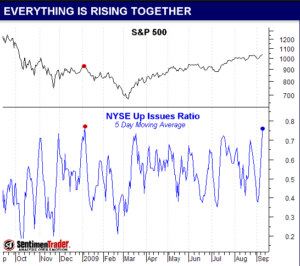 To put this into perspective, out of more than 17,000 trading days since 1940, fewer than 16 of them recorded a reading this extreme.

What’s even more unusual is that this has occurred so long after the market bottomed.  It’s not at all unusual to see huge breadth thrusts coming out of a major oversold condition (something we discussed extensively this spring), but it’s terribly unusual to see it six months after a low.

Now on to Part II…