In previous commentaries I have noted the continual shortfall between the Federal Reserve’s stated inflation target (2% (percent change from year ago) on the (Core) PCE Price Index) and the actual readings.  For years there has been a continued inability for this 2% inflation target to be achieved, which is highly notable.

However, as seen in the Wall Street Journal article of June 29, 2018, titled “Inflation Is Here, What Will The Fed Do About It?,” this 2% target has recently been achieved.

An excerpt from the article:

The Commerce Department on Friday reported that its measure of consumer prices rose 0.2% in May from April, putting it 2.3% above its year-earlier level. More important, core prices, which the Fed follows closely, were up 2% on the year. That marked the first time core inflation, which excludes food and energy to better capture inflation’s trend, reached 2% since April 2012.

Here is a long-term chart showing the readings since the year 2000: 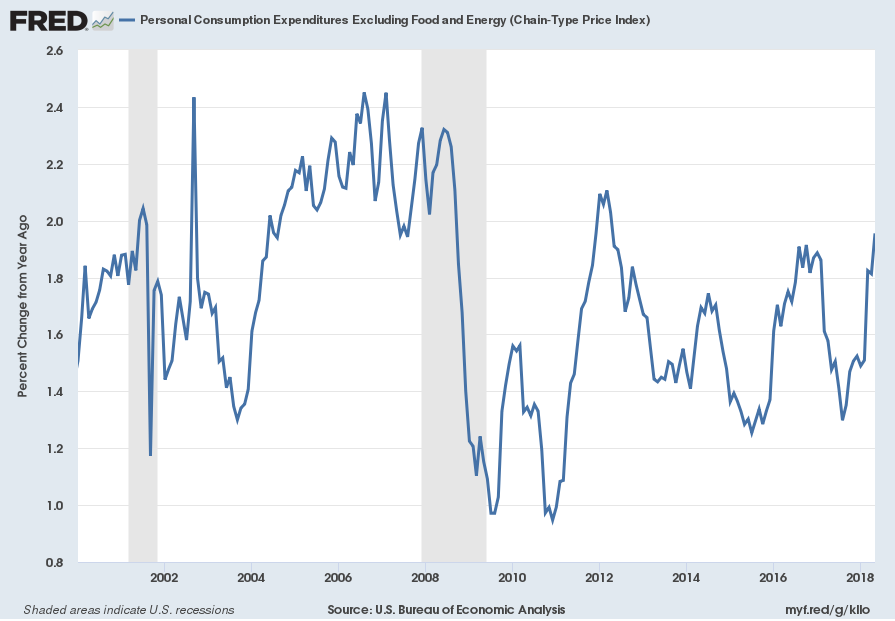 As discussed in various posts regarding deflation, as well as other recent commentaries,  I continue to believe that significant (in extent and duration) U.S. deflation (as defined by when the CPI goes below zero) is on the horizon.