The Index of Small Business Optimism increased in November by 3.7 points to 107.5.

“We haven’t seen this kind of optimism in 34 years, and we’ve seen it only once in the 44 years that NFIB has been conducting this research,” said NFIB President and CEO Juanita Duggan. “Small business owners are exuberant about the economy, and they are ready to lead the U.S. economy in a period of robust growth.”

After several solid quarters, job creation slowed in the small business sector as business owners reported a seasonally adjusted average employment change per firm of 0.0 workers. Thirteen percent (down 1 point) reported increasing employment an average of 3.0 workers per firm and 10 percent (down 1 point) reported reducing employment an average of 2.9 workers per firm (seasonally adjusted). Fifty-two percent reported hiring or trying to hire (down 7 points), but forty-four percent (85 percent of those hiring or trying to hire) reported few or no qualified applicants for the positions they were trying to fill.

Eighteen percent of owners cited the difficulty of finding qualified workers as their Single Most Important Business Problem (down 2 points), second only to taxes. This is the top ranked problem for those in construction (33 percent) and manufacturing (22 percent), getting more votes than taxes and the cost of regulations. Thirty percent of all owners reported job openings they could not fill in the current period, down 5 points from the record-high level reached in July and October. Eleven percent reported using temporary workers, down 3 points. A seasonally adjusted net 24 percent plan to create new jobs, up 6 points to a record high reading. Hiring plans were strongest in professional services, manufacturing and construction.

Reports of higher worker compensation were unchanged at a net 27 percent, historically very strong all year. Owners complain at record rates of labor quality issues, with 85 percent of those hiring or trying to hire reporting few or no qualified applicants for their open positions. Eighteen percent selected “finding qualified labor” as their top business problem, far more than cite weak sales. Plans to raise compensation fell 4 points in frequency to a net 17 percent, still a solid number, but a surprise as labor markets seem to be getting tighter. The frequency of reports of positive profit trends improved 2 points to a net negative 12 percent reporting quarter on quarter profit improvements, a solid reading historically, among the best since 2007. 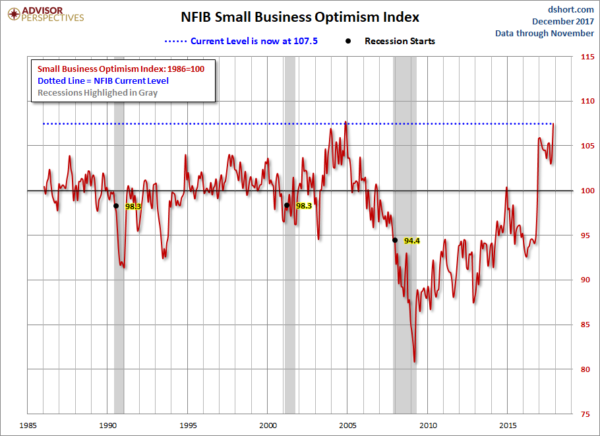