The Index of Small Business Optimism increased in August to 105.3.

The NFIB Index rose 0.1 points to 105.3. Five of the components increased, while five declined. The lofty reading keeps intact a string of historically high performances extending back to last November.

“Consumer demand is very strong, and the regulatory relief has been dramatic,” said Duggan. “Small business owners still expect progress on tax reform and healthcare, and they will be watching closely.”

According to NFIB Chief Economist Bill Dunkelberg, the August figures for capital outlays are typical of a growing economy.

“Small firms are now making long-term investments in new machines, equipment, facilities, and technology,” he said. “That’s a real sign of strength, and it will be interesting to see if the August result becomes a trend.”

Small business owners reported a seasonally adjusted average employment change per firm of 0.18 workers per firm over the past three months, virtually unchanged from July. Fourteen percent (up 1 point) reported increasing employment an average of 4.4 workers per firm and 12 percent (up 1 point) reported reducing employment an average of 2.4 workers per firm (seasonally adjusted). Fifty-nine percent reported hiring or trying to hire (down 1 point), but 52 percent (88 percent of those hiring or trying to hire) reported few or no qualified applicants for the positions they were trying to fill. Nineteen percent of owners cited the difficulty of finding qualified workers as their Single Most Important Business Problem (unchanged), second only to taxes. Labor quality is the top ranked problem in Construction (33 percent) and Manufacturing (25 percent), receiving more votes than taxes and regulatory costs. Thirty-one percent of all owners reported at least one job opening they could not fill in the current period, down 4 points but a very high reading. A seasonally adjusted net 18 percent of owners plan to create new jobs, off 1 point from July but historically very strong.

Three percent of owners reported that all their borrowing needs were not satisfied, unchanged and historically very low. Thirty-four percent reported all credit needs met (up 3 points) and 49 percent explicitly said they were not interested in a loan, down 2 points. Including those who did not answer the question, 63 percent of owners have no interest in borrowing, down 3 points. Thirty-one percent of all owners reported borrowing on a regular basis (up 1 point). The average rate paid on short maturity loans was down 40 basis points at 5.5 percent, little changed even as the Federal Reserve raises rates. 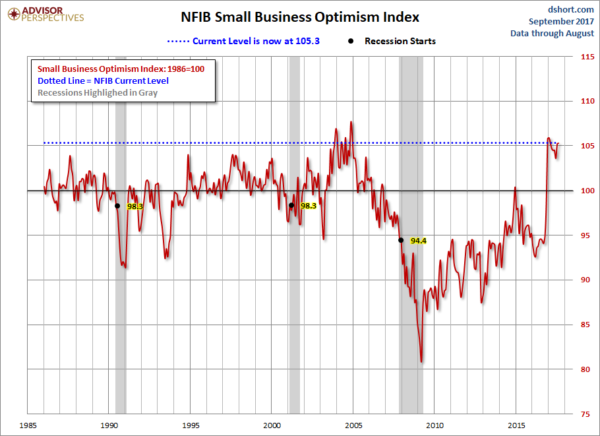