The Index of Small Business Optimism decreased .6 points in February to 105.3.

“Small businesses will begin to turn optimism into action when their two biggest priorities, healthcare and small business taxes, are addressed,” said Duggan. “To small business, these are both taxes that need reform. It is money out the door that strangles economic growth.”

Three percent of owners reported that all their borrowing needs were not satisfied, down 1 point. Thirty percent reported all credit needs met (down 1 point), and 52 percent explicitly said they did not want a loan. However, including those who did not answer the question, uninterested in borrowing, 67 percent of owners have no interest in borrowing. Record numbers of firms remain on the “credit sidelines”, seeing no good reason to borrow yet, in spite of the surge in optimism. As optimism is translated into spending plans, borrowing activity should pick up. Only 2 percent reported that financing was their top business problem compared to 22 percent citing taxes, 15 percent citing regulations and red tape, and 17 percent the availability of qualified labor. Weak sales garnered 12 percent of the vote. 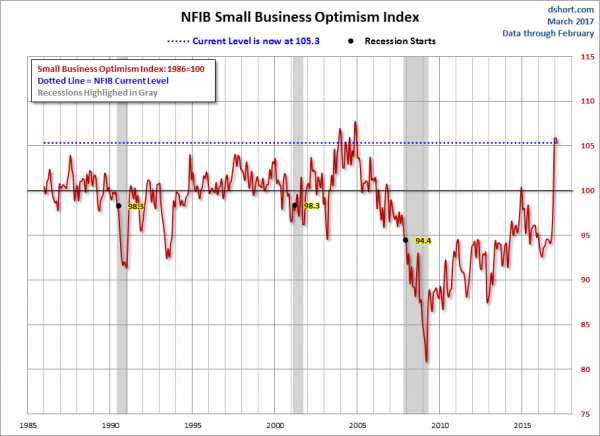