The existence of various immensely large asset bubbles continues to be among the most worrisome aspects of today’s financial and economic system.

I have written extensively about this asset bubbles issue.

One aspect that is particularly notable is the cause(s) of such bubbles.  As I wrote in the January 9, 2017 post (“Low Interest Rates And The Formation Of Asset Bubbles“):

There are many theories as to why asset bubbles form.  My own thoughts on the matter are highly complex, especially concerning the current-era bubbles.

One common theory as to why asset bubbles form is the existence of (ultra-) low interest rates.  I have discussed this facet previously, including in the December 2, 2009 post titled “Bubbles.”

Many believe that keeping interest rates “too low” for an extended period of time leads to a variety of risks and adverse conditions, including excessive speculation and (future) financial instability.  As an example, the period of ultra-low interest rates is often named as a primary factor in the housing market “crash.”

For reference purposes, shown below is a chart comparing the effective Federal Funds rate and the S&P500, on a daily LOG basis since the year 2000: 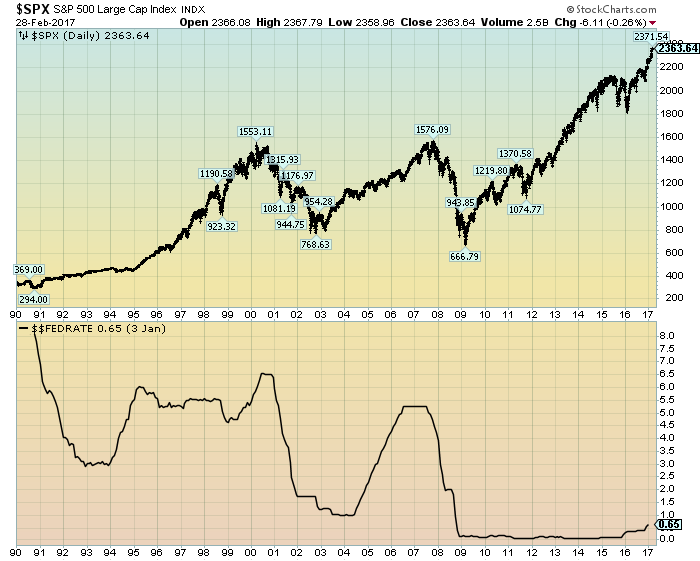 The existence and size of the stock market bubble – along with other attributes and characteristics of the financial and economic system – continue to create a highly hazardous environment.  What my analyses continue to indicate – and as I stated (in part) in the March 18, 2014 post titled “Was A Depression Successfully Avoided?” –

While no one likes to contemplate a future rife with economic adversity, I do believe that our current economy and financial system on an “all things considered” basis have vastly problematical working dynamics much more pernicious than those existent prior to and during The Great Depression.