The Index of Small Business Optimism increased 3.5 points in November to 98.4.

Here are some excerpts from that I find particularly notable (but don’t necessarily agree with):

Small business optimism remained flat leading up to Election Day and then rocketed higher as business owners expected much better conditions under new leadership in Washington, according to a special edition of the monthly NFIB Index of Small Business Optimism, released today.

Reported job creation remained weak in November with the seasonally adjusted average employment change per firm posting a gain of 0.02 workers per firm, positive, but barely. Fifty-eight percent reported hiring or trying to hire (up 3 points), but 52 percent reported few or no qualified applicants for the positions they were trying to fill. Sixteen percent of owners cited the difficulty of finding qualified workers as their ‘Single Most Important Business Problem’.

Thirty-one percent of all owners reported job openings they could not fill in the current period, up 3 points and the highest reading in this recovery. The increase accurately predicted the decline in the unemployment rate from what many already call a “full employment” level. Sixteen percent reported using temporary workers, up 1 point. A seasonally adjusted net 15 percent plan to create new jobs, up 5 points from October and the strongest reading in the recovery.

Four percent of owners reported that all their borrowing needs were not satisfied, unchanged from October. Thirty percent reported all credit needs met (up 1 point), and 52 percent explicitly said they did not want a loan, down 1 point. Only 2 percent reported that financing was their top business problem. Thirty-one percent of all owners reported borrowing on a regular basis (up 3 points). The average rate paid on short maturity loans rose 40 basis points to 5.6 percent. Overall, loan demand remains historically weak, owners can’t find many good reasons to borrow and invest, even with abundantly cheap money. 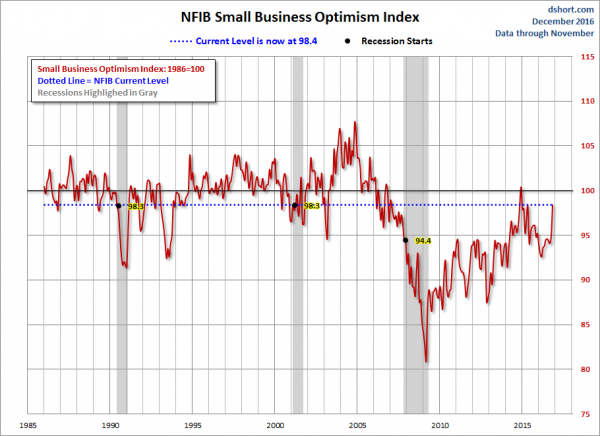