Throughout this site there are many charts of economic indicators.  At this time, the readings of these various indicators are especially notable.  While many are still indicating economic growth, others depict (or imply) various degrees of economic weakness.  Perhaps most prominent among those indicating economic growth is the First Quarter 2016 “Advance Estimate” of GDP (pdf) at 0.5%.

Below are a small sampling of charts that depict greater degrees of weakness and/or other worrisome trends, and a brief comment for each.

As depicted by this chart showing various Federal Reserve Regional Manufacturing Indexes, there has been weakness in the recent readings:

Various manufacturing statistics have recently been showing weakness.  This is seen in many metrics, including the various Federal Reserve regional manufacturing surveys.

Other aspect of manufacturing trends, as seen in various indicators, include the Value of Manufacturers’ New Orders for Consumer Goods Industries, last updated May 4, 2016: 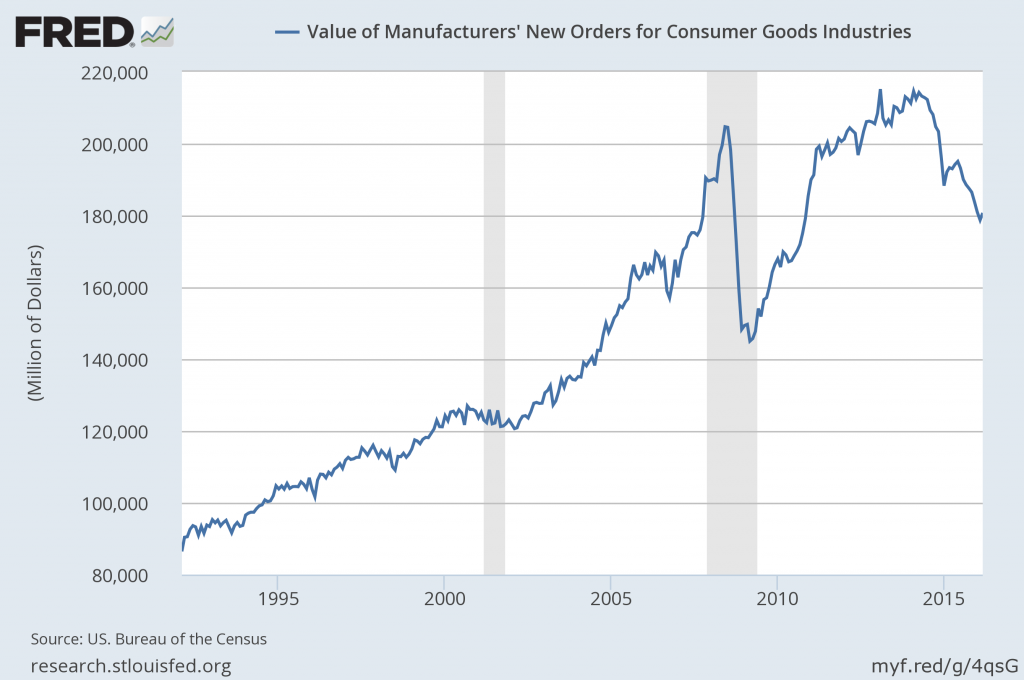 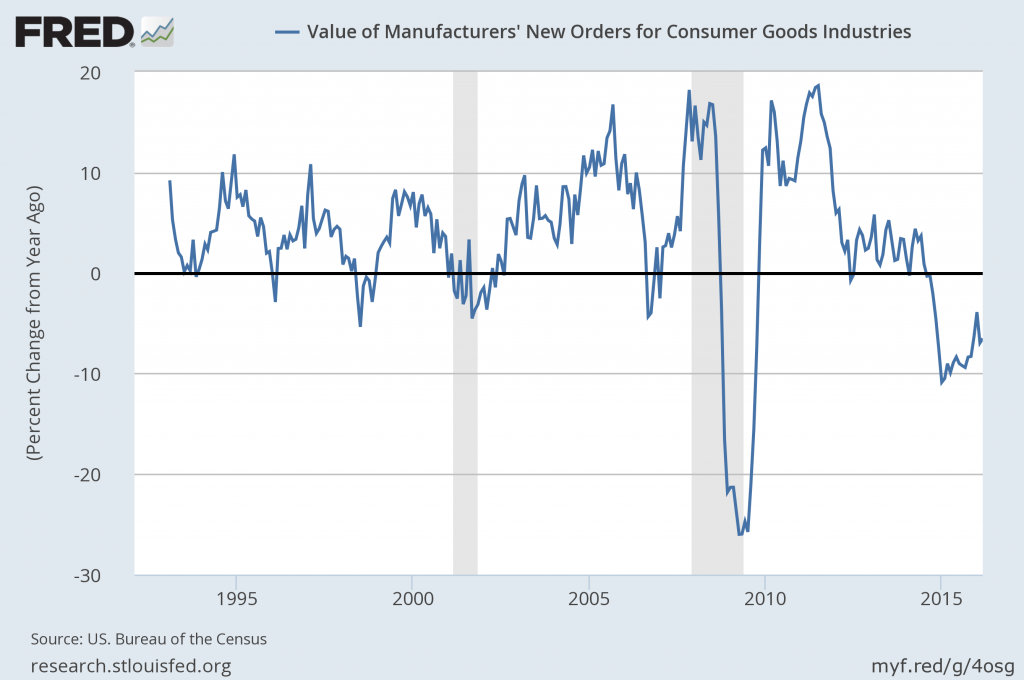 An additional concern is the seemingly (very) high levels of inventory, as seen in various measures, such as Total Business:  Inventories to Sales Ratio, last updated April 13, 2016: 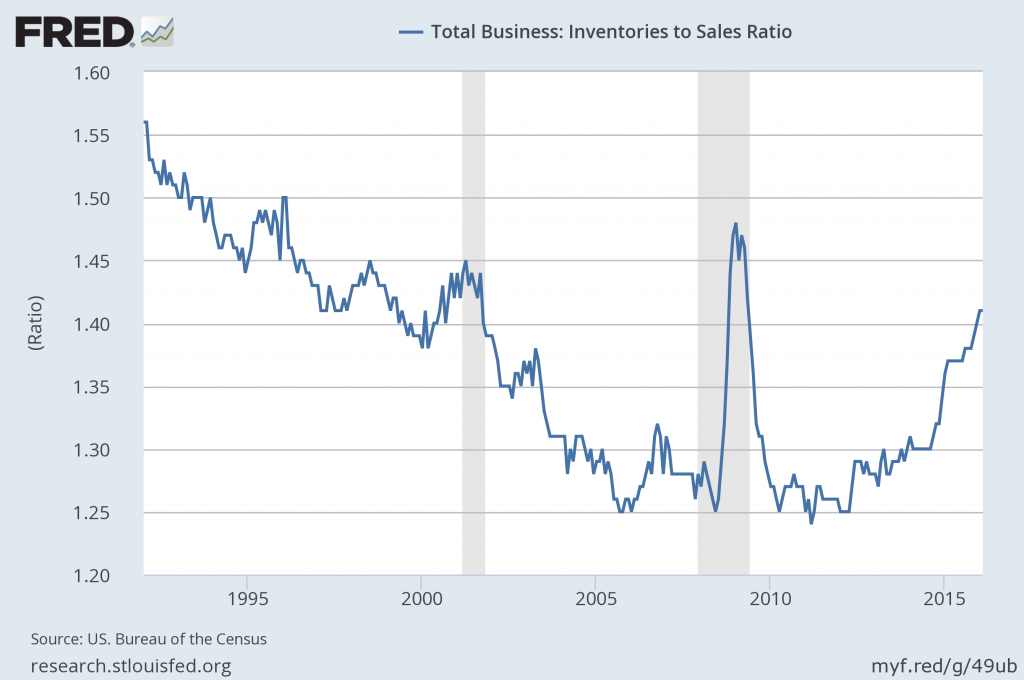 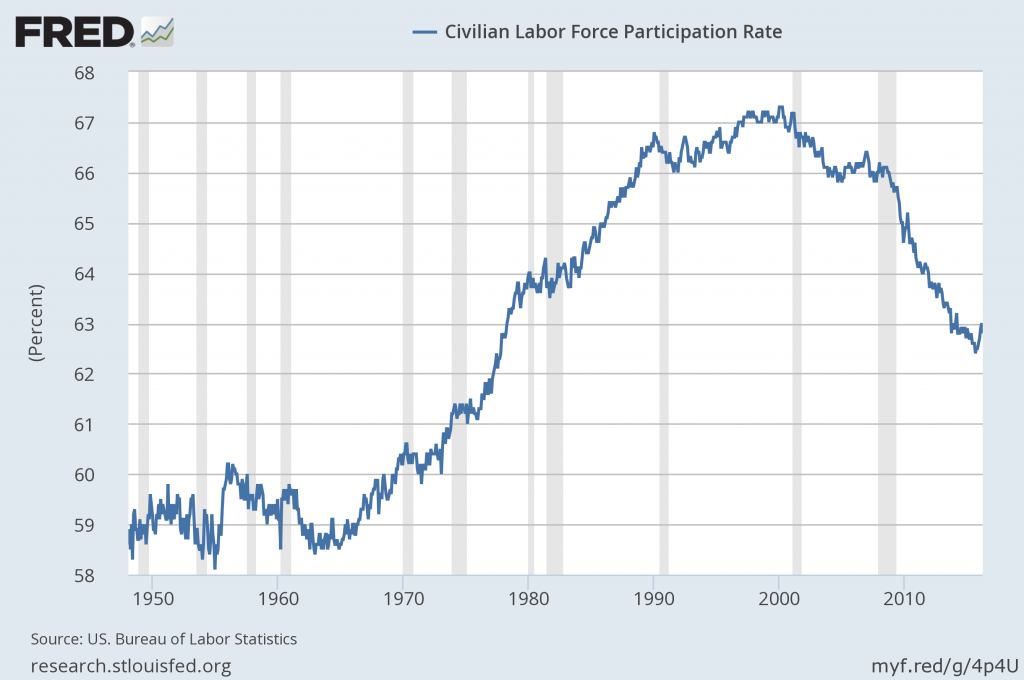 My analyses indicate that the underlying dynamics of the unemployment situation, including that of the Labor Force Participation Rate shown above, remain exceedingly worrisome, especially with regard to the future.  These dynamics are numerous and complex, and greatly lack recognition and understanding, especially as how, from an “all-things-considered” standpoint they will progress in an economic and societal manner.

While I don’t believe that the Federal Reserve’s Labor Market Conditions Index (LMCI) is an accurate portrayal of the overall employment situation, it is notable in that, as opposed to the Unemployment Rate and Total Nonfarm Payrolls statistics, it appears to be indicating weakness. The LMCI is described as being “derived from a dynamic factor model that extracts the primary common variation from 19, seasonally-adjusted, labor market indicators.”  A reference document is seen in the May 22, 2014 document titled “Assessing the Change in Labor Market Conditions.” 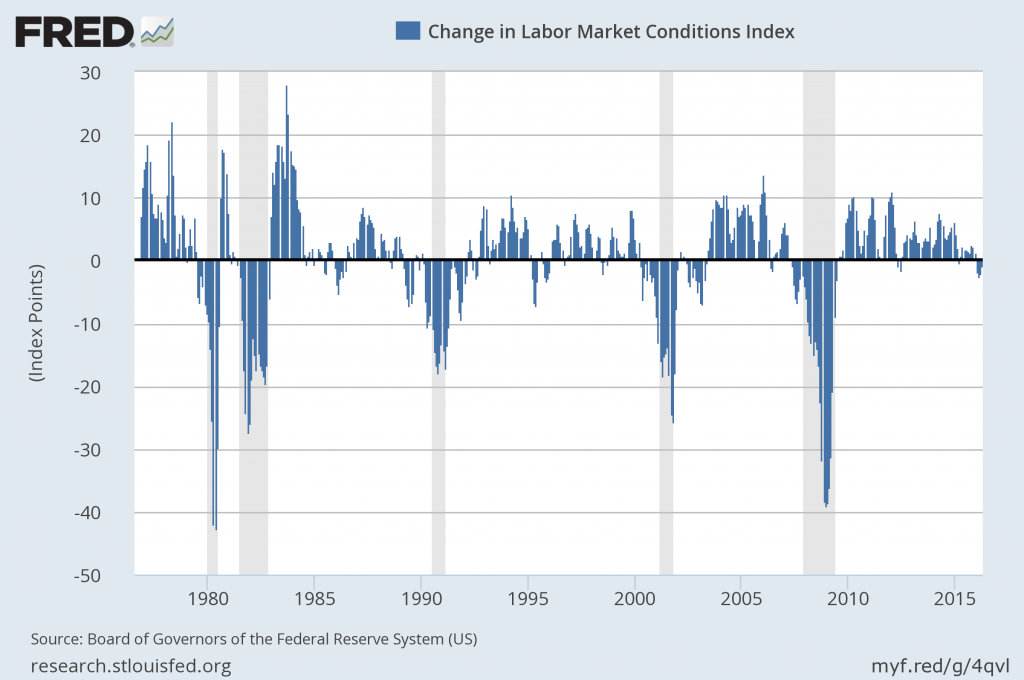 source:  Board of Governors of the Federal Reserve System (US), Change in Labor Market Conditions Index [FRBLMCI], retrieved from FRED, Federal Reserve Bank of St. Louis, accessed May 9, 2016:

The below chart shows inflation, as depicted by the PCE Price Index:

As depicted above, the shortfall between the Federal Reserve’s stated inflation target (2% on the PCE Price Index) and the actual inflation reading continues.  The level of current inflation and the possibility of deflation is a vastly complex topic, and as such isn’t suitably discussed in a brief manner.  I have discussed the issue of deflation extensively as I continue to believe that outright sustained deflation will occur.  As I have stated in past commentaries, I don’t believe that surveys or “market-based” measures concerning deflation will provide adequate “advance warning” of impending deflation.