Yesterday, The Wall Street Journal had an Op-ed titled “Unemployment: What Would Reagan Do?”

I found the article interesting as it provides a good explanation of the Civilian Employment-Population Ratio and its history.  An excerpt:

“Since America has about 238 million noninstitutionalized civilian adults of working age, this decrease means that we have nearly 12 million fewer jobs today than we would have if the employment-population rate were still at its 2007 level of 63%.

No other recession in the past 60 years saw such rapid job destruction in either absolute or percentage terms. In the 1979-82 recession, unemployment topped out at a higher rate, 10.8%, but the employment-population ratio declined by only three percentage points, to 57% from 60%.”

Below is the long-term chart of this ratio, as found on the St. Louis Federal Reserve site: 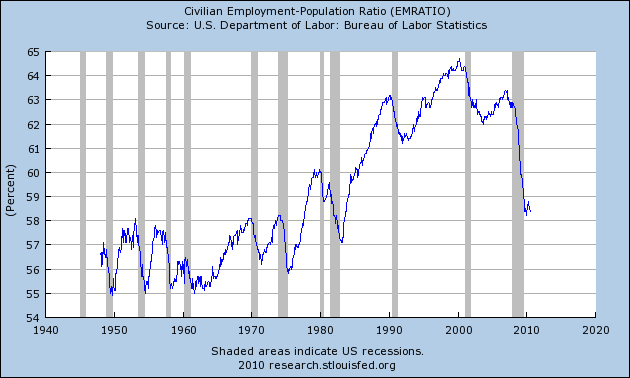 Although this Civilian Employment-Population Ratio is not a statistic that gets a lot of mention, it is nonetheless an important statistic and concept.