The recently introduced “Economic Security Index” is notable on many fronts.

Here is a summary from the “About” page:

“The Economic Security Index (ESI), sponsored by the Rockefeller Foundation, measures the share of Americans who experience at least a 25% drop in their available family income whether due to a decline in income or a spike in medical spending or a combination of the two, and who lack an adequate financial safety net to catch them when they fall. A higher ESI therefore indicates greater insecurity, much as a rising unemployment rate signals a faltering economy.

Data are available for the ESI from 1985 through 2007, with projections for the most recent years (a less complete form of the index is available back to the late 1960s).

The ESI looks at actual economic losses, not at who fears or is vulnerable to them. The threat of such losses is real and growing for all Americans.”

From the homepage, this summary is provided:

“The Economic Security Index shows that economic insecurity disproportionately affects the less advantaged, but has risen substantially for all Americans.” 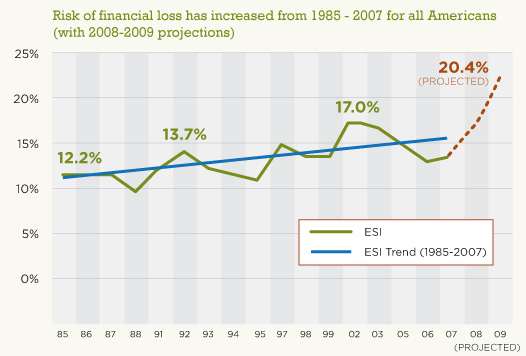 I find this Economic Security Index interesting for a variety of reasons.

There are many implications that can potentially be drawn.

Once I further research this Index, I will write another post(s) about it and its implications.