While there are various similarities between the economic situation of 2008 and 2015, there are also many notable differences.

A comprehensive comparison would be extensively lengthy and would contain many complex aspects.  As such, no short discussion can even begin to be a comprehensive discussion of the economic and financial similarities and differences of the two periods.  However, in this post I would like to highlight various notable “high-level” aspects, and, for purposes of brevity, provide links to further relevant commentary.

Both the stock markets of 2008 and 2015 had experienced multi-year bull markets.  Both years had considerable price volatility:

I continue to believe, as stated in numerous stock market posts, that the stock market is but one asset class of many that are experiencing exceedingly immense bubbles.

Commodity weakness was a central theme in 2008, and certainly has been in 2015.  This is seen in the chart below, using the Bloomberg Commodity Index as a proxy:

There are many differences between 2008 and 2015 regarding monetary policy and its various measures.  Of course, one major difference is the Fed Funds rate, which has been near zero since December 2008.  This contrasts greatly with 2008 as well as previous longer-term history: 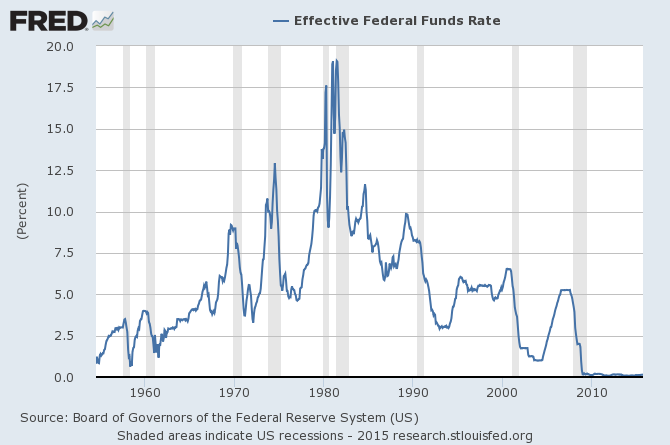 There are many differences between 2008 and 2015 regarding interest rates, as seen in various measures.  From an economic perspective, there is great significance in the current (ongoing) level of (ultra) low interest rates.

For reference, the 10 Year Treasury Note Yield is used as a proxy:

I continue to believe, as discussed in various posts concerning the bond market bubble, that interest rates will increase substantially as the bond bubble bursts/deflates.

Inflation, as measured by the CPI and PCE Price Index (as well as variants) differs considerably between the 2008 and 2015 time periods.  Inflation was a significant concern in 2008, whereas in 2015 “too-low inflation” remains a significant factor.  In fact, the shortfall between the Federal Reserve’s stated inflation target (2% on the PCE Price Index) and the actual inflation reading continues.  This 2% inflation target has been “missed” (inflation has been less than 2%) for well over three years.

As of now in 2015, the overwhelming consensus among professional economic forecasters is for slow but steady growth, with the odds of recession seen as low, if not very much so.

However, despite this widespread consensus that the U.S. economy is “advancing” – and some believe to be “strong” – my analyses indicates that the economy continues to have many problematical areas of weakness and the widespread consensus concerning current economic vitality is (substantially) incorrect.  While perhaps the strongest indication of significant economic growth is seen in the 2nd quarter 2015 GDP figure (third estimate) of 3.9%, this figure seems (very) high in relation to other various economic measures, some of which show (very) weak growth if not outright contraction.  While the list of such measures is extensive, one such broad group of measures is seen in the Federal Reserve’s regional economic surveys.  A chart, from Doug Short’s post of September 28, 2015, titled “Regional Fed Manufacturing Overview:  September” shows these various readings since 2001:

Heading into the fall of 2008, unemployment was relatively low.  In 2015, the official unemployment rate is also low, currently seen as 5.1%: 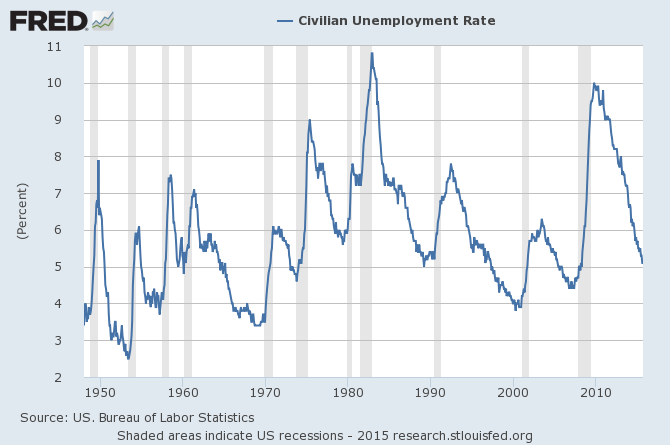 One problematical issue leading into and throughout 2008 was the widening of credit spreads and other related measures of financial stress.  In 2015, there has been an increase in various measures depicting credit spreads and related financial stress.  One well-known spread measure is the spread between Moody’s Seasoned Baa Corporate Bond and the 10-Year Treasury Constant Maturity, as depicted below: 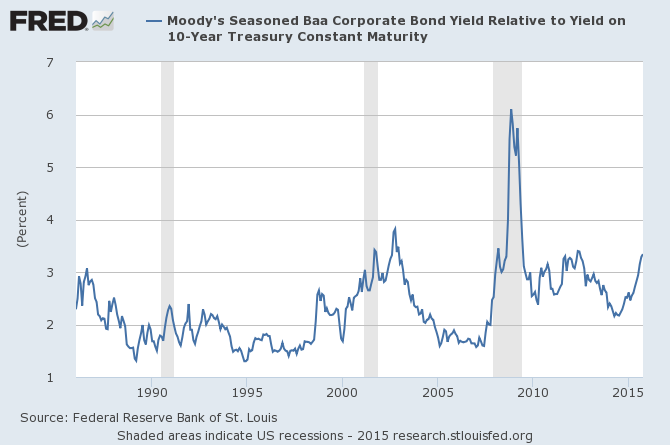 Problems in various banks and other financial institutions were rampant leading into and throughout 2008, and many believe that these problems “caused” the upheaval that became know as “The Financial Crisis.”  Many of the problematical issues were well-publicized at the time.  Bank stocks were under substantial pressure prior to and throughout 2008.

In contrast, in 2015 there seems to be little, if any, ostensible problems in the banking/financial sector.  Certainly any media coverage regarding such has been almost nonexistent.

In the chart below, financial stocks are depicted by the XLF in the top plot.  In the lower plot, one can see the XLF relative to the S&P 500:

(click on charts to enlarge images)(chart courtesy of StockCharts.com) 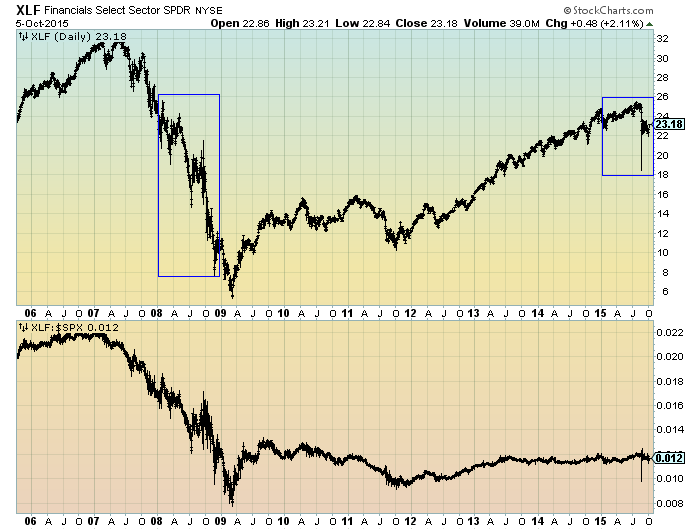 However, the question remains whether banks are as “healthy” as purported; as well, a tangential issue is whether the bank “stress tests” are an accurate predictor of how well banks will fare in a (substantial) economic downturn.

A critical question is whether overall financial and economic risk has been substantially reduced following the Financial Crisis?  Based on very little widespread commentary in 2015 regarding a heightened level of U.S. financial risk, ostensibly overall U.S. financial risk would seem low.  Relatively low (although recently rising) levels of stress is seen in the the St. Louis Fed Financial Stress Index (STLFSI) as well as other measures such as the Chicago Fed National Financial Conditions Index (NFCI) depicted below: 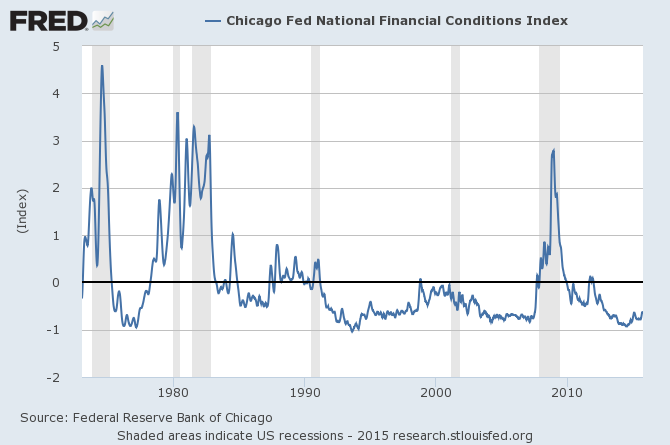 Is this risk assessment accurate?  While the subject is complex, my analyses indicate that the steps that have been taken to lessen risk in the economy and financial system will prove ineffectual relative to the problems – and vast peril – in the financial system.  I have discussed this in various posts, including those featured in “The U.S. Economic Situation” updates.