Recently many indicators that are supposed to depict the level of risk in the financial markets and economy have been at or near all-time lows.

Among these indicators are those that are broadly based, such as the VIX, VXO (VIX predecessor), St. Louis Financial Stress Index (STLFSI), and Chicago Fed National Financial Conditions Index (NFCI), as well as a variety of spreads and other risk indicators.

Among the critical questions these purported (ultra) low risk levels beg is whether there is indeed very low levels of underlying risk in the financial system and economy; and if such low levels of risk leave the system susceptible to upheaval once risk, as measured by these indicators, rebounds.

Is there currently very low levels of underlying risk in the financial system and economy?  I feel that the answer to this question is very complex.  While the aforementioned risk indicators certainly seem to indicate risk is very low, to believe in such would also seem to imply that there are no problematical issues within the financial system and economy as a whole.  I certainly disagree with this assessment; in fact, one of the truly troubling issues is that various problematic issues concerning the financial system are not being addressed – and many are being exacerbated – as time goes on.  I discussed some of these issues in the September 18, 2013 post titled “Has The Financial System Strengthened Since The Financial Crisis?”

The second issue, whether these low levels of risk will leave the system susceptible to future upheaval, is also complex.  While a variety of arguments and analyses can be presented, even from a relatively simplistic viewpoint, it seems clear that there is a link between low risk premiums in one period being followed by financial upheaval in subsequent periods.  While this can be shown in various measures, readings of the VIX seem representative, especially if one uses prolonged sub-20 readings as a general guidepost of overly low risk premiums that then lead to problematical issues:  (note: I discussed this VIX demarcation of 20 in the February 7, 2012 post titled “The VIX Level Of 20 And Its Continual Significance“) 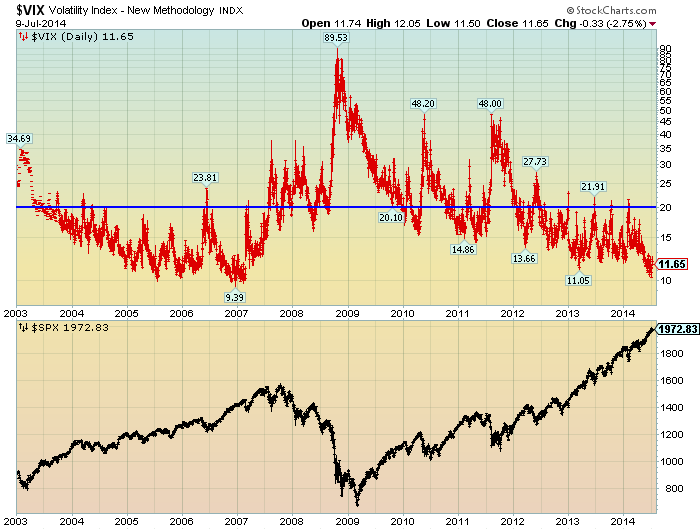 The above chart shows the 2003-2007 period as being one of sustained, very low risk premiums, followed by the Financial Crisis.  Of course, now it is generally acknowledged that many problematical issues were present in 2003-2007.  The same phenomenon – sustained low risk premiums followed by upheaval – was also seen in the latter-1990s if one looks at the VXO, the “original formula” VIX.

My analyses continue to indicate that the economic upheaval that will follow this current period of low risk premiums will be highly outsized from a long-term historical perspective.