Much has been written in the financial press about the possibility of impending inflation, or even hyperinflation.  These possibilities are discussed as being likely due to the “loose” monetary policy that has been enacted to combat The Financial Crisis.

If one were to believe that inflation has or will soon “breakout,” one would probably expect gold to perform strongly.  At around the current 930 level, gold has “held its own” over the last year, but certainly hasn’t put in what might be called a strong performance, all things considered.

One measure that I follow is the ratio of HUI (an index of gold stocks) to that of the physical metal itself.  One theory, perhaps the predominant one, is that the gold stocks should move, or at least verify, the price movements of the physical gold itself.   Looking at the weekly chart (seen below) over the last 10 years seems to indicate that although gold has been relatively buoyant over the last year, the gold stocks, as seen by the HUI Index, have lagged since early 2008.  One interpretation of this is that the gold stocks are not confirming the move in gold, meaning that gold may soon head down, which could indicate that inflation fears are overstated. 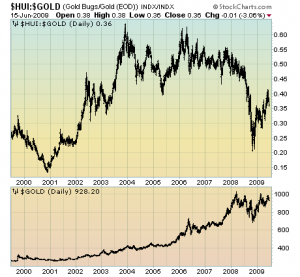